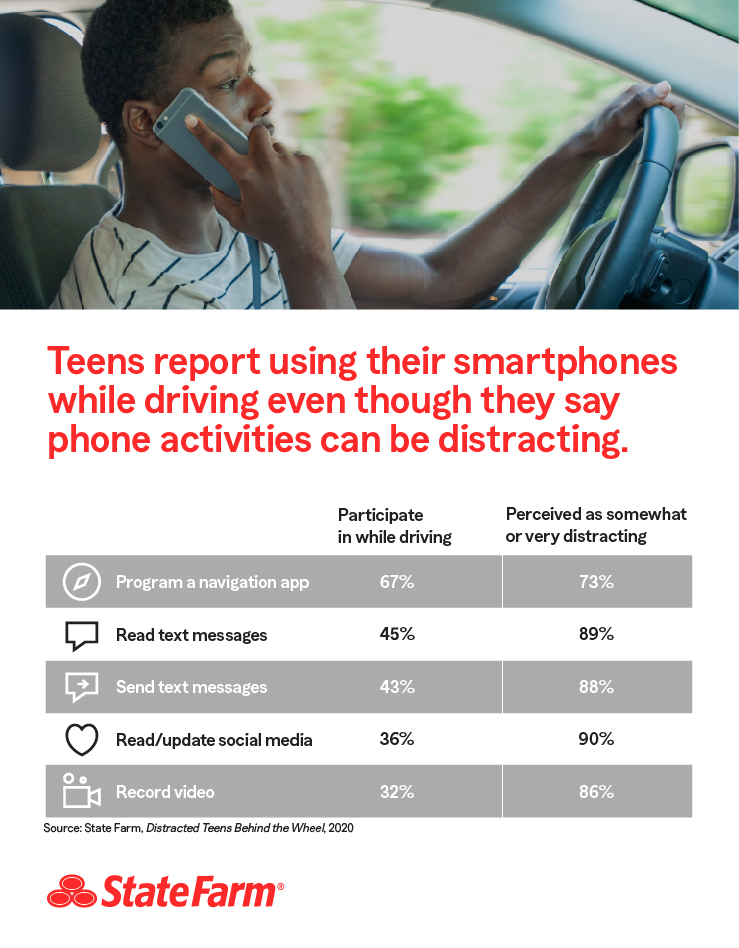 Time to Refocus Teen Driving Behaviors
New study reveals teens take their eyes off the road to focus on cellphones.
A new State Farm® online survey examines teen attitudes and behaviors about the use of smartphones while driving. This is what teens say:
Nine out of ten teenage drivers say they engage in at least one smartphone behavior while driving.
Parents influence their teenage children. Teens whose parents use cellphones while driving were more likely to do the same.
Teens report using phones while driving despite finding such activities distracting and believing they can increase the likelihood of a crash.
Teens who have been in an accident have a higher tendency to use their phone when behind the wheel.
Many teens reported driving a vehicle equipped with an advanced safety feature: automatic emergency braking, adaptive cruise control, or lane keeping assist. These teens more likely engaged in distracted smartphone behaviors while driving than those who drove vehicles without safety features. Teens are comfortable taking their eyes off the road to focus on other tasks when the safety systems are active. This is a dangerous combination.
“Drivers who engage in distracting behaviors while behind the wheel are making the decision to put themselves, their passengers and other road users at risk,“ said Laurel Straub, Assistant Vice President of Enterprise Research at State Farm. “Unfortunately, this risk often leads to crashes, injuries, and fatalities. These tragedies are preventable.”
For teens, parents are an important role model in the car.
"Our data shows that teens who admit to using a smartphone while driving are more likely to have a parent or guardian who also uses a phone while driving,” Straub added.

When learning hands-on driving skills it's important to:
Eliminate distractions when behind the wheel.
Practice your driving skills with your parents.
Enroll in drivers education courses.
Review state graduated drivers licensing laws.
Establish restrictions, boundaries and curfews.
Tips to avoid distractions while driving (not just for teens!):
Put the phone away. Set it to send an automatic reply while driving – no texts, internet, selfies or social media.
Adjust controls -  GPS, radios, air conditioning, or mirrors – before driving.
If you must call, pull over and park in a safe place or ask your passenger to call.
Always, always have your head in the game – drive safe.


Did you know...
Texting is banned for all drivers in 48 states and the District of Columbia. Missouri bans texting for drivers 21 and younger. Montana has no texting ban. Cellphone usage is restricted for young drivers in 37 states and the District of Columbia.  Cellphone use laws by state
Traffic crashes are a leading cause of death for teens. Impairment, passengers, distractions from mobile phones and navigation systems, speeding, and not wearing a seat belt are among the major contributing factors to the number of teen injuries and fatalities on our nation’s roads each year.
Innovations such as Adaptive Cruise Control and Lane Keeping Assist are designed to make our roadways safer. However, these systems are meant to assist drivers, not replace them.
Even with these technologies in place, it’s important for drivers to pay attention when behind the wheel. Research shows that keeping your hands on the steering wheel and eyes on the road decreases the odds of crash involvement.
Types of Driving Distractions:
Cognitive – mind off driving task
Manual – hands off steering wheel
Human error is the attributing factor in 94 percent of motor vehicle crashes in the United States.1
In 2018, distracted driving factored into approximately 14% (938,000) of all police-reported crashes, resulting in at least 2,841 deaths and an estimated 400,000 injuries.2
As of 2019, 81% of Americans owned a smartphone and 96 % of young adults (under 30) owned a smartphone.3
*Source: 1, 2 National Highway Traffic Safety Administration; 3 Pew Research Center

About State Farm®:
The mission of State Farm is to help people manage the risks of everyday life, recover from the unexpected, and realize their dreams. State Farm and its affiliates are the largest providers of  auto  and  home  insurance in the United States. Its 19,200 agents and 59,000 employees serve approximately 84 million policies and accounts – over 81 million auto, fire, life, health and commercial policies and over 2 million bank and investment planning services accounts.  Commercial auto insurance , along with coverage for  renters ,  business owners ,  boats  and  motorcycles , is available. State Farm Mutual Automobile Insurance Company is the parent of the State Farm family of companies. State Farm is ranked No. 36 on the 2020 Fortune 500 list of largest companies. For more information, please visit  http://www.statefarm.com .
Like a good neighbor, State Farm is there. ®