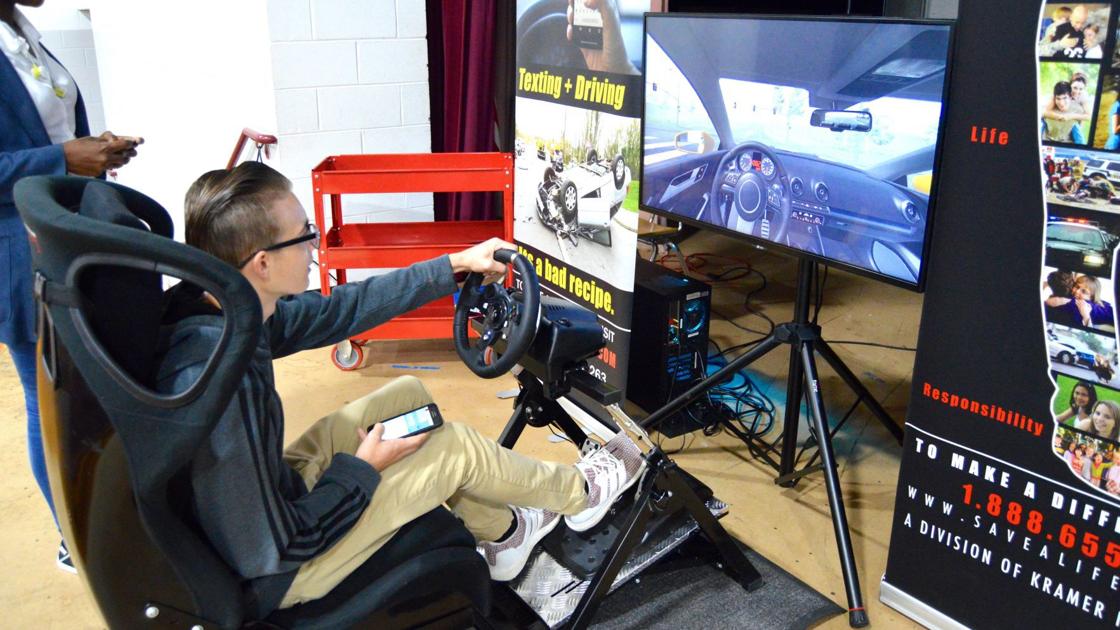 NOTEBOOK: Virtual reality teaches students about dangerous driving
Salem Central School District student Nate Bourn test drives a simulator while texting recently to see how dangerous it can be, without having to risk actual harm or damage.
Courtesy photo
Save
Argyle Central School students were given a glimpse of the consequences of distracted driving through a hands-on simulation program put on by the Save A Life Tour recently.
The tour travels both domestically and internationally to inform, educate and demonstrate the deadly consequences of distracted or impaired driving.
The tour features virtual driving simulators to give a full appreciation of how texting and driving can impact a person’s ability to drive.
NOTEBOOK: The King sings in Hudson Falls
Presentations, surveys and take-a-way reminders were also included in the program to encourage students to focus on driving and not their phones while behind the wheel.
The tour is used by several states’ departments of transportation for their own training on the dangers of impaired or distracted driving.
Salem Art Works on display at SUNY Adirondack
SUNY Plattsburgh Professor of Sculpture Drew Goertlitz's piece "Vasculum," left, Chelsea Thew's sculpture "Motherload" and Chris Zirbes' piece "Quetzalcoatl" are seen here. They are three new sculptures on SUNY Adirondack's campus as a result of the school's and Salem Art Works' extended partnership for pieces to be displayed at the college.
Courtesy photos
SUNY Adirondack and Salem Art Works have continued a long-term partnership to display several large outdoor sculptures around the school’s campus, according to a news release from the college.
This is the second time the school has partnered with Salem Art Works, and the first set of sculptures were loaned to the school in 2015.
The school’s art collection curator, Rebecca Pelchar, said the new pieces were chosen by a committee based on size, ease of transport and style.
×
You have run out of free stories. To continue reading, take advantage of our LOWEST offer yet!
{{featured_button_text}}
“We knew it was time to rotate them,” Pelchar said. “We wanted to make sure they would be appealing to people on campus and easy to install and it’s nice to have something fresh every few years.”
The new pieces include a steel and concrete work by Chelsea Thew titled “Motherload,” a large vase-shaped piece titled “Vasculum” from SUNY Plattsburgh Sculpture Professor Drew Goertlitz and a piece by New York City-based sculptor Chris Zirbes titled “Quetzalcoatl.”
Salem Art Works is a nonprofit arts center offering courses for artists in addition to promoting the appreciation of contemporary art in the Capital Region.
Student loan defaults down slightly
The number of people defaulting on their student loans is down slightly compared to last year, according to The Institute for College Access & Success .
Institute President James Kvaal said in a news release the number of people defaulting who entered into repayment in 2016 dropped slightly, from 10.8% the first year to 10.1% in 2018.
EDUCATION CONNECTION: Forever fund created to help area students
The family of Hadley-Luzerne alumnus Ronald “Ronnie” Lee Wright established a fund last year…
Kvaal said the decline is encouraging, but more than 1 million students still default on their loans each year and legislation protecting borrowers is still needed.
“Default is unequivocally the worst outcome for student loan borrowers. Its consequences are costly, long-lasting and often punitive, and they can leave students worse off than if they had never attended college at all,” Kvaal said.
He said students who attend for-profit colleges still have the vastly disproportionate share of defaults, making up a third of the number of students failing to make payments despite being 9% of the total number of students nationwide.
Subscribe to Daily Headlines