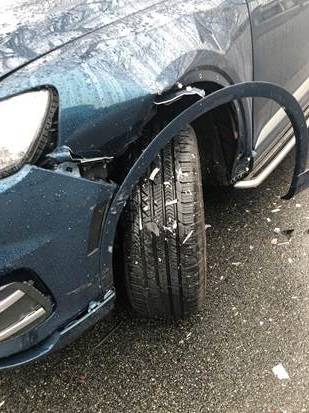 Send this page to someone via email

A Burnaby woman is venting her frustration after a hit-and-run driver smashed head-on into her parked car, in an incident captured on security video.

Jamie, who did not provide her last name out of safety concerns, said it happened Monday around 11:20 a.m. near Duthie Avenue and Curtis Street.

“I thought at first it was a small dent or scratch, and I was not expecting a full-on head-on crash type damage,” said Jamie, upon hearing from a neighbour someone had smashed into the car.

“This is my forever car, this is going to be my family car. We just got it two months ago, so it’s brand new.”

Jamie said the Audi SUV suffered significant front-end damage, and is now making a variety of strange sounds under the hood.

She said no one got a licence plate, but she posted the video on a variety of social media platforms in hopes of identifying the suspect.

“I fee like this guy actually could be a drunk driver. It was abnormal — my street is wide, there’s no other cars, there’s no way he could just ram into my car without seeing it,” she said.

“He could be texting and driving as well, and I don’t think those types of people should be on the road.”

Grant Gottgetreu, a forensic consultant and retired West Vancouver police officer, said he had the same suspicions about the driver of the offending vehicle.

But he said it would be unlikely that the driver would face serious consequences.

That’s because unless police can prove who was behind the wheel, the most serious penalty would be a ticket under the Motor Vehicle Act.

He said if officers could prove who was driving, there would be grounds for a Criminal Code charge.

“It was obvious that whoever was driving fled right away in an obvious attempt to escape criminal or civil liability.”

Burnaby RCMP confirmed it was investigating, but said it had not identified the driver of the suspect vehicle.