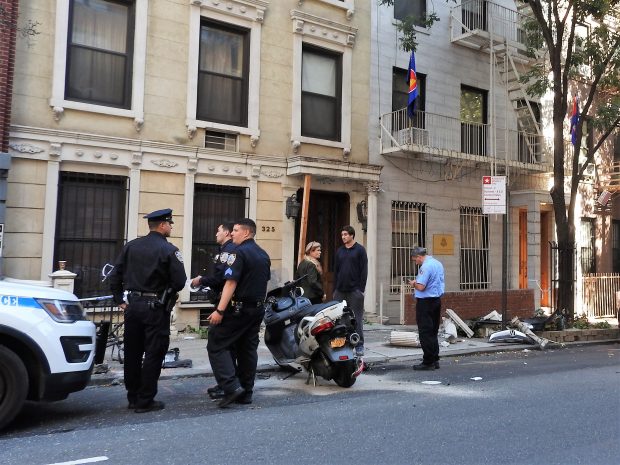 According to the National Highway Traffic Safety Administration, most car accidents, including those in New York City, can be traced back to the motor vehicle operators themselves in the form of driver negligence or operator error.

According to the New York City Police Department as of March 19, 2019 there have already been over 17,500 accidents in the city. These include motor vehicle drivers, motorcyclists, bicyclists, and pedestrians.

The most common causes of car accidents in New York City, according to the New York City Police Department are:

Many other states allow drivers to use cell phones for voice communication, but New York restricts all devices held in your hand. These regulations apply to every driver in New York, except if they are stopped in traffic.

Additionally, New York regulations do permit the use of certain devices, and may grant you permission to use a handheld device in the following situations:

Texting in New York is a primary offense. This means that the police can pull you over if they suspect you of texting even if you haven’t committed any other traffic violation. The New York texting and driving laws were enacted in 2009 and make it illegal to text while your motor vehicle is moving.

A driver must maintain a safe distance when travelling behind another vehicle.  Generally, the rule is one car length for every 10 miles per hour.  So if you are travelling 50 miles per hour, you must be five car lengths behind the vehicle ahead of you. If you follow the vehicle in front of you too closely and that car or truck stops suddenly, and you do not have enough room to stop, you were tailgating.

Tailgating is considered a form of aggressive driving in New York.

One of the leading causes of car accidents in New York City is speeding or driving at a speed unsafe in conditions such as fog, ice, and heavy traffic. When you are driving too fast, you won’t have the proper reaction time to stop or take any evasive action to avoid being in a car accident. If you’re involved in a car accident while speeding, the likelihood of significant and serious injuries to you, your loved one, and others increases dramatically.

In today’s fast- moving society, there are many drivers who speed up at stoplights and have a total disregard for stop signs.  Not only are these drivers a hazard on New York City streets, their behavior can cause devastating injuries should they be involved in a car accident.

The New York City Police Department reports that many preventable car accidents are caused by drivers who are tired, drowsy, and/or fell asleep at the wheel.  Driving while fatigued slows down your reflexes and reaction times.  Additionally, if you are driving fatigued, you may experience the lack of capacity to make the right decisions that are required to drive safely.

In some cases, a New York City car accident may occur due to a failure of a motor vehicle. It could be defective tires, brakes, airbags, or another automobile parts.

In other instances, the road may be partially responsible for your New York City car accident due to it being improperly maintained, having bad road design, improper or defective traffic control devices, potholes and other conditions such as icy roads.

In these instances, a “third party” other than the drivers could be found to be liable for your or your loved one’s injuries. That could be an automobile company, government, or contractor that is responsible for your New York City car accident.

In addition to all of these causes hundreds if not thousands of car accidents may be caused by dangerous or inexperienced driving such as: