Gridlock Guy: DUI death rates and the easy options to get home safely 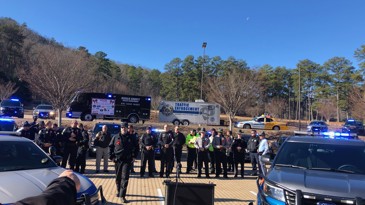 “They’re going to arrest any and all drunk and drugged drivers that they find behind the wheel of a vehicle,” GOHS Director Allen Poole sternly said, motioning to a couple dozen officers in formation behind him. “So be aware — this is your Christmas present, this warning right here today. There will be no exceptions.”

Drunk-driving fatalities have decreased in the past 40 years, but a GOHS news release highlighted some startling figures from the National Highway Traffic Safety Administration on these avoidable deaths. More than 10,500 people died in these crashes in the U.S. just last year, with more people dying over the late December holiday period than any other. Georgia saw 375 inebriation-related deaths on the roads in 2018, which is 5% more than in 2017, the GOHS said. More than a quarter of all traffic-related deaths involved alcohol in Georgia in 2018.

This campaign is supposed to scare people straight, but that isn’t the sole goal. It’s not about writing tickets, collecting revenue, and imprisoning people. “Drive Sober or Get Pulled Over” is about spreading awareness; this coalition also wants people to know that they have options, even free ones, if they celebrate a bit too hard.

“We urge all of you to have a plan,” AAA spokesperson Garrett Townsend said. “Make sure you know in advance how you’re going to get home or to your destination, if you’re going to have something to drink.”

AAA is one of at least two organizations to give people an out, if they have their car and have had too much to drink. AAA’s “Tow-To-Go” program offers a free tow and ride home for up to two people. That may seem like too much of an ordeal, but it is free to anyone (not just AAA members) until 6 a.m., January 2nd, 2020. People can just dial (855) 2-TOW-2-GO or search for the offer online.

TEAM Georgia is a safe- and sober-driving coalition that mobilizes volunteers at different events to sign up attendees to pledge not to drink and drive. I’m on the board with TEAM Georgia and have been on hand for these different concerts and sporting events and seen many people make pledges. Chairman Ron Fennel, who is also an outgoing Smyrna city councilman, explained how TEAM Georgia partner Checker Cab Company is helping the cause.

“They’ll give you a free ride home during the holidays. If you can’t make it home unimpaired, they’ll take you home.” Checker Cab has been a TEAM Georgia partner for 30 years and has offered these rides to anyone in DeKalb County or the City of Atlanta during the holiday season each year. Like AAA, they will offer these rides home only (not to another party) through January 2nd. People can book rides at 404-351-1111 or AtlantaCheckerCab.com.

Fennel also reminds people that distracted driving is part of the problem on the roads, especially with so many people driving in unfamiliar areas. So drivers need to plan their ride as far as who may be driving to and from a party and then plan that commute beforehand. Texting and driving has the same effect as inebriation.

Just as we discussed in the distracted driving column last week, a series of small bad decisions can add up to a supernova of consequences. We (me, too) justify small slips in judgment as our best bad decisions in the moment. Good, well-meaning people often say “I’m fine” or “Let me have a cup of coffee to sober up” when facing the prospect of leaving their cars at a party. They often aren’t greedy thieves or monsters that kill squirrels with hammers. They’re regular folks who get behind the wheel just a bit too tired or inebriated. Then tragedy strikes and the cosmic fabric changes forever.

» RELATED: Here are the worst times to drive in Atlanta for Christmas 2019

Partygoers, take this all to heart and know that you have options. Party hosts, you have responsibilities to make sure people are taking the safest routes home. If they push back, order them an Uber yourself or offer to drive them home and Uber back yourself. There aren’t many things in this country that kill more than 10,000 people per year, but booze-wrecks do. As a nation, we have made inroads on this epidemic, but there is still a long way to go.

Your subscription to the Atlanta Journal-Constitution funds in-depth reporting and investigations that keep you informed. Thank you for supporting real journalism.