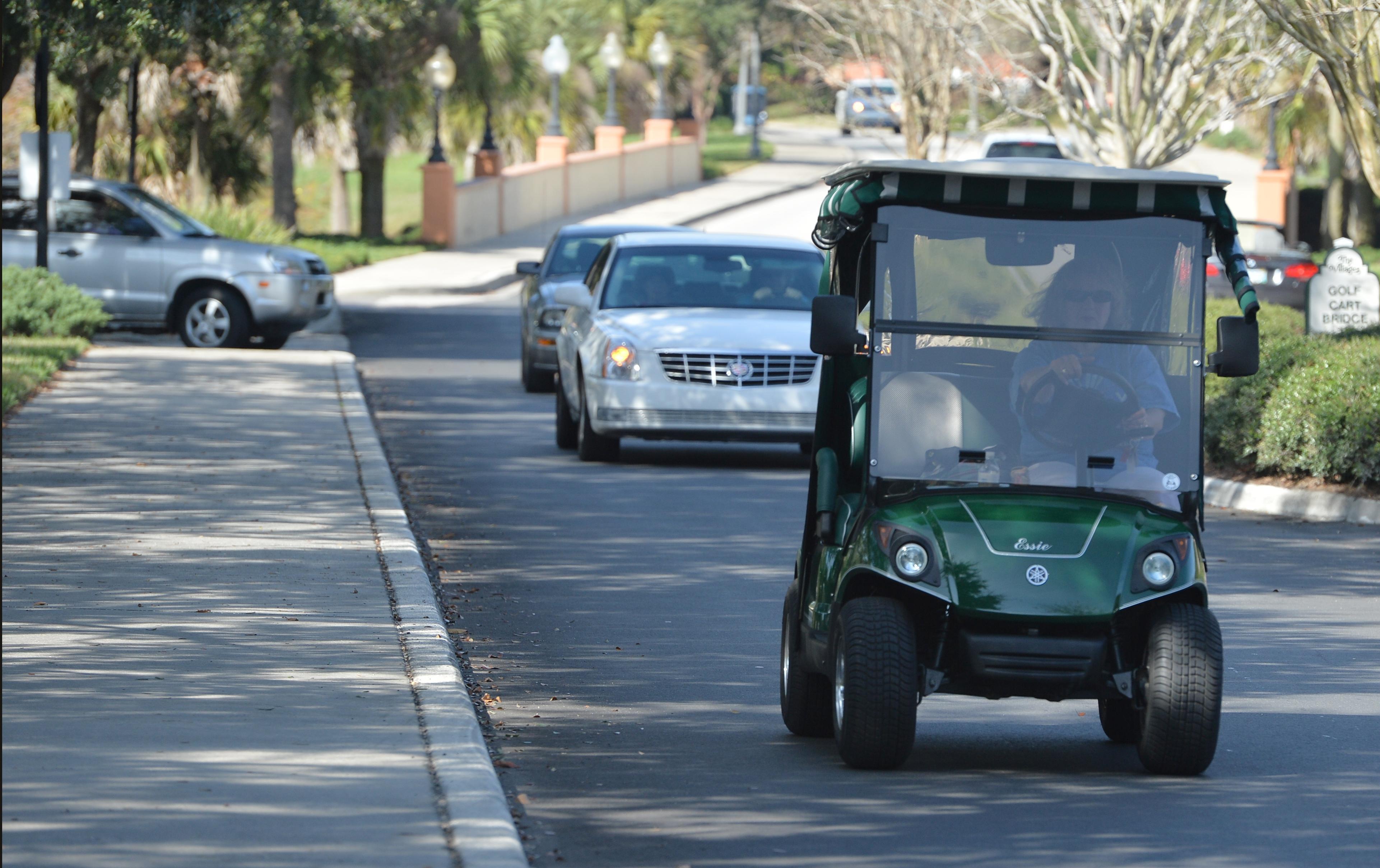 If you've received a warning by running afoul of the new Florida texting/driving laws, consider yourself lucky. Your grace period is expiring on New Year's Day.

And golf cart drivers? Well, for many of you, that includes you, too.

Florida's texting/driving laws actually went into effect July 1, and the hand-held ban in school zones and construction zones followed suit on Oct. 1. Many law enforcement agencies across the state, including the Florida Highway Patrol, gave drivers a six-month "breaking in" period with warnings, rather than fines, for basic texting infractions.

'Enforcement time' to begin on texting-while-driving in Florida

According to the News Service of Florida, highway patrol troopers have issued about 800 warnings, although several law enforcement agencies have issued tickets that resulted in $100-plus fines once the surcharges, tax fees and court costs were added.

But do the laws apply to golf carts, too? It all depends on the definition of what is actually a golf cart, and what isn't, in the eyes of the law.

Melbourne Police Cmdr. Marc Claycomb, who recently clarified the difference with Lt. Channing Taylor of the Florida Highway Patrol, said, "If the vehicle is registered, on a roadway and even slow moving, then the law applies to those licensed drivers."

Videos on social media showing high school students driving golf carts while texting has emphasized that it's difficult enough to control the cart, and "when you add speed to that, it makes it exponentially more dangerous," Claycomb said.

Rep. Emily Slosberg, D-Boca Raton, filed a bill (HB 249) in late September for the 2020 legislative session that would make it illegal for people to operate vehicles at any time while "manually holding or otherwise touching a wireless communications device." Such rules are followed in 20 states, including California and New York, plus Washington, D.C.

Claycomb said golf carts are not prevalent in his areas of jurisdiction, but "as far as distracted driving, we see a lot of it. Hopefully, this new law will cut down on that."

The city of Satellite Beach, like other communities in Florida, has an ordinance that allows slow-moving vehicles, called Low-Speed Vehicles (LSVs), on its streets.

Mayor Frank Catino admits the Low-Speed Vehicles "look like regular golf carts but they must be street-legal and have all those safety features, and that was our main concern. We didn't want it to be, like when we were kids, you'd see 46 kids on it and packs of beer ... we didn't want that."

According to Satellite Beach's City Ordinance 1166, each Low-Speed Vehicle requires a registration permit as well as personal injury protection (PIP) and property damage insurance, and is limited to speeds between 20 and 25 mph. Safety devices range from an orange reflector triangle on the back to a windshield cleaning device, and headlamps and seat belts, of course.

The law in Florida states a standard golf cart can only be operated on roads designed for use by golf carts. However, the designation of "golf cart roads" can change from county to county. But no motor vehicle can be driven on a public sidewalk, although several communities allow standard golf carts on eight-foot-wide sidewalks.

In Brevard County, "golf cart" is defined as a "motor vehicle designed and manufactured for operation on a golf course for sporting or recreational purposes." Golf carts may be operated up to a maximum speed of 15 miles per hour on multi-use sidewalks and trails, where posted. Golf carts are not required to be titled or registered or insured.

Brevard County, in its statutes, refers to Low-Speed Vehicles as Neighborhood Electric Vehicles (NEVs), which "shall mean a self-propelled electrically powered motor vehicle which is emission free, designed to be operated at a maximum speed of 25 miles per hour, has at least four wheels in contact with the ground, has an unloaded weight of less than 1,800 pounds, is equipped with efficient brakes, headlights, brake lights, turn signals, windshield, rearview mirrors, and three-point safety belts.

Commander Bert Berrios with the Satellite Beach Police Dept. said the Low-Speed Vehicles in his areas may operate on streets where the posted limit is 35 mph or less.

"So the same rules apply for the vehicle (cars, trucks, etc.) as it would for them," Berrios said. "But I'll be honest, we don't really see texting going on, it's usually the adult driving with kids aboard and they're usually focused on the road."

Berrios is in favor of the complete hand-held ban, proposed by Rep. Slosberg, because "it makes it easier for law enforcement (to hand out a ticket) because it's obviously easier for us to see. Right now, they could be looking at a GPS, so how do you prove texting? I'm just hoping this law expands."

"Unfortunately, you see a lot of bad things happen on the roadways and a lot of that is from distracted driving," Berrios said. "... maybe somewhere down the line, they'll find a way to restrict (texting altogether) on golf carts. I mean, lets face it, the sidewalks are where you're going to encounter the most pedestrians."

According to the Florida Department of Highway Safety and Motor Vehicles, there is a difference between the golf cart you'd normally see on a golf course and what is called a Low-Speed Vehicle, although looks can be deceiving.

* Any person operating an LSV must have a valid driver license in their immediate possession.

* LSVs may be operated only on streets where the posted speed limit is 35 mph or less and must be equipped with all the standard safety equipment such as headlamps, stop lamps, turn signal lamps, taillamps, reflex reflectors, parking brakes, rearview mirrors, windshields, seat belts, and a vehicle identification number (VIN).

* Golf carts are defined in section 320.01(22), Florida Statutes, as "a motor vehicle that is designed and manufactured for operation on a golf course for sporting or recreational purposes and that is not capable of exceeding speeds of 20 miles per hour."

* Golf carts may be operated on roadways that are designated for golf carts with a posted speed limit of 30 mph or less.

* Golf carts may also cross a portion of a county road which intersects a roadway that is approved for golf carts, or that intersects a golf course or mobile home park. In both examples the roadway should have signs posted that golf carts share the roadway.

* The operation of golf carts on roads must comply with any more restrictive ordinances enacted by local government and should be verified prior to operating these vehicles.

* Golf cart operators are not required to have a driver license; however, to operate a golf cart on designated public roadways, a person must be 14 years or older.

If you do get a ticket in Florida, don't think for a moment your citation will cost you either just the basic $30 (first violation) or $60 (subsequent violation). Court fees, assessments and taxes will push each of those well beyond the $100 mark, according to data supplied to FLORIDA TODAY from the Brevard County Clerk of Courts.

According to Brevard County Clerk of Court Scott Ellis, the first offense is a non-moving violation and it will run you a total of $119 (but no points) when adding court costs and surcharges. A subsequent offense will cost you a total of $169 and three points against your driving record.

Effective Oct. 1, a texting/driving violation in a school zone or work zone automatically became $169 and three points, according to the Clerk of Court.

In addition, according to data supplied from The Zebra (thezebra.com), the nation’s largest car insurance comparison marketplace, a distracted driving violation can cause an estimated 25% rate increase, or on the average, about $509 a year. How much your rates rise depends on the violation, your car insurance company's pricing standards, and differing local insurance regulations. That's why tickets may have a different impact on insurance in your state compared to the national average.

And, as far as comparing auto vehicles to golf carts when it comes time for insurance, there is a connection.

According to Danielle Marchell, public relations specialist with Austin, Texas-based The Zebra, most insurance companies offer add-ons to your auto insurance that allow you to customize your policy.

"There is a miscellaneous type of vehicle endorsement, which extends coverage to other vehicle types not included in your standard policy," she said. "This may include golf carts, motorcycles, scooters, and other vehicles."

This story originally published to floridatoday.com, and was shared to other Florida newspapers in the new Gannett Media network.