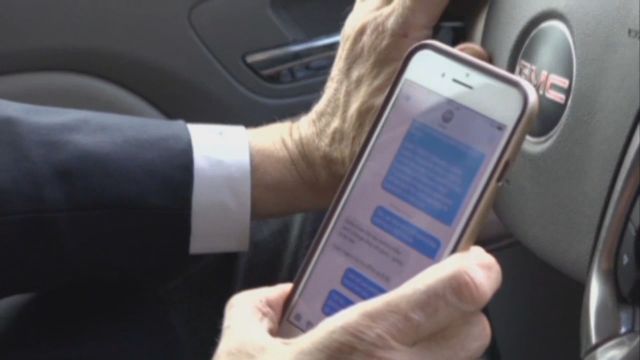 He told 8 On Your Side he is already teaching his daughter when it is time for her to get behind the wheel, the phone needs to stay out of her hands.

“If I try to enforce it with her,” he said, “I actually have some stuff to back me up.”

“It really will be up to the discretion of the deputy or officer if they give a ticket, but starting Jan. 1, you can get a $163 ticket and it assess 3 points on your license,” Hillsborough County Deputy Donald Rizer told 8 On Your Side.

Blaine Woodrome from Hudson said he can thank his mom for a reminder that the grace period is over.

“She’s the one who told me,” he said, “so I know if I’m going to use my phone I know I got to use it before I leave the house.”

To avoid a potential ticket and three points on his license, Woodrome said he’ll keep placing his phone in a cup holder.

Late Wednesday afternoon at the intersection of West Spruce and Dale Mabry, it looked like most drivers were obeying the law while 8 On Your Side’s camera was recording.

Hazenberg said he sees plenty of distracted drivers during his daily commute to St. Petersburg.

“I see people just swerving all day long in the fast lane doing 70, 80 miles an hour,” he said, “really bothers me.”

The numbers haven’t been released for 2019. According to the Florida Department of Highway Safety and Motor Vehicles, there were more than 52,000 distracted driving crashes in 2018.