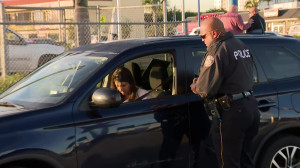 SWEETWATER (CBSMiami) — Put the phone down while you are driving. Florida’s no texting while driving law is now in full effect and police in Sweetwater took part in a strict enforcement Wednesday.

Police were out in full force during Wednesday’s enforcement, not giving our warnings, but tickets.

“It’s time that they realize that it’s a very serious issue. We take it very seriously, especially when it comes to the safety of our community,” said Sweetwater Police officer Jonathan Archie.

For months the message was out.

The state’s new law made texting while driving a primary offense on July 1, 2019, but there was a grace period, which ended on New Year’s Day. During that grace period, police were giving mostly warnings instead of fines, but that’s all over now.

“There will be no tolerance on the street. We ask for the drivers to pay attention and to put it down,” said Carlos Sarmiento of the Florida Department of Transportation.

Wednesday morning, several Sweetwater police officers were pulling drivers over on SW 2nd Street in a school zone, caught with their phones in hand.

Under the new law, school zones and construction zones have been designated hand free zones.

“Meaning not only can you not text on your phone, you cannot pick up that phone, cannot use your GPS while in a school zone or a construction zone.  We are trying to protect the lives of these children and the lives of construction workers,” explained Florida Highway Patrol spokesman Alejandro Camacho.

“On a daily basis you see people on the phones, calling, texting. This is a school zone where parents are constantly crossing from one side of the street to the other,” said Sweetwater Mayor Orlando Lopez.

Sebastian Rios is one of the many parents who walk their children to school every day.

“I think it’s a good deal you’re definitely trying to stop someone from not only hurting themselves but also others for texting and driving, it’s dangerous,” said Rios. “Yea it’s a good effort we wish people get off their phones.”

However there are exceptions to every rule. It is okay to text if a vehicle is stopped at a red light and motorists can use a GPS device while driving.