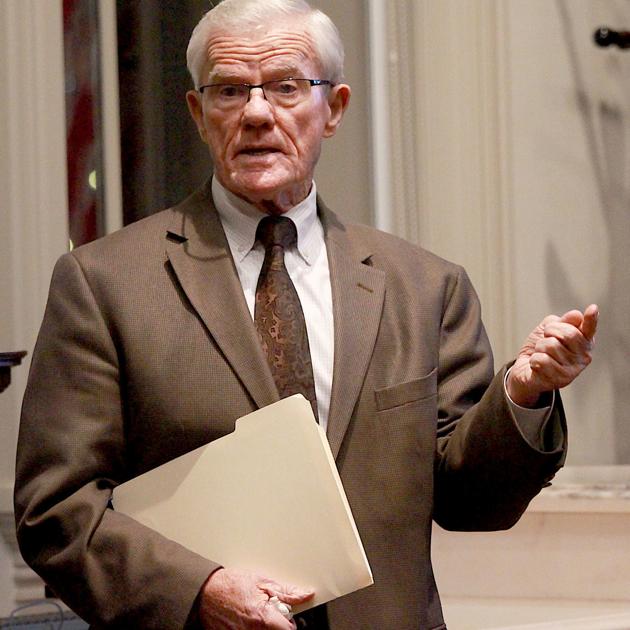 Rep. Johnson presents legislative focuses, including distracted driving, education
Rep. Dan Johnson, R-Logan, addresses community members at a town hall meeting at the Historic Cache County Courthouse last week.
Savannah Pace/Herald Journal
Save
With Utah’s 2020 General Legislative Session just around the corner, Rep. Dan Johnson, R-Logan, has been meeting with residents to talk about his focus items and priorities.
The tax reform bill, passed in a special session in December, is a top concern for many members of the community. Beginning in early January, volunteers in the valley and across the state have been gathering signatures to dispute the bill.
“There are things in it that people like, maybe something that people don’t like,” Johnson said in a town hall meeting last week in Logan. “But you have to look at the scope of it.”
×
Advertisement
Critics of the bill say the increased sales tax in the bill will put undue burden on poor families. Johnson said if people sit down and look at the numbers, they show that this is overall a step that will leave more money in people’s pockets at the end of the day.
This long-term theme carried over into Johnson’s explanation of what he is working on as he prepares for the legislative session. With two appropriation requests and five bills filed, Johnson said he has been working really hard and is anxious to start the session.
“There are so many different pieces and so many huge topics that have many subtopics that are being addressed this year,” Johnson said.
One of those topics is distracted driving.
Johnson was asked to co-sponsor a bipartisan bill to prohibit the use of handheld devices while driving. While texting and driving is already against the law, this bill would extend to prohibit handheld use of phones while driving.
“My feeling is that in Utah, it is time,” Johnson said. “For some it might be a firestorm and others might recognize the need. We will see where it goes.”
Johnson said most people don’t like more restrictions from the government but he referenced the law banning smoking in restaurants as a parallel. He said it seemed restrictive at first but it has reduced second-hand smoke exposure, which saved lives. Johnson said this distracted driving bill also has the potential to save lives by decreasing the number of accidents that are caused by distracted driving.
“It is a cultural shift,” Johnson said. “But we can do it.”
Johnson spent 50 years working in education and has two bills that affect students and schools.
Story continues below video
“Education is the most important thing that we have,” Johnson said. “It expands the possibilities of our community.”
One of the bills , which has been filed and numbered H.B. 16, amends provisions related to funding and reporting requirements regarding school meals. This means the revenue gathered through school lunch programs can be used for school breakfasts as well.
“Settling kids in for the day, the right way, is the best thing we can do,” Johnson said. “Starting out with breakfast can help students engage better in class.”
Johnson said there is a lot of pressure put on teachers to meet so many different standards, and he hopes his two bills involving education will help take some stress away.
The second bill is in reference to civic education. Johnson said the bill would incorporate a new curriculum into schools that allows students to earn credits for engaging civically in their communities.
“The personalization of education for both students and teachers is important and can help relieve pressure,” Johnson said. “Changing how we experience learning can create a long-lasting influence.”
More information about Rep. Johnson and the other legislation he is currently working on, including a bill about motorcycle right-of-way laws, can be found at house.utah.gov/rep/JOHNSDN.