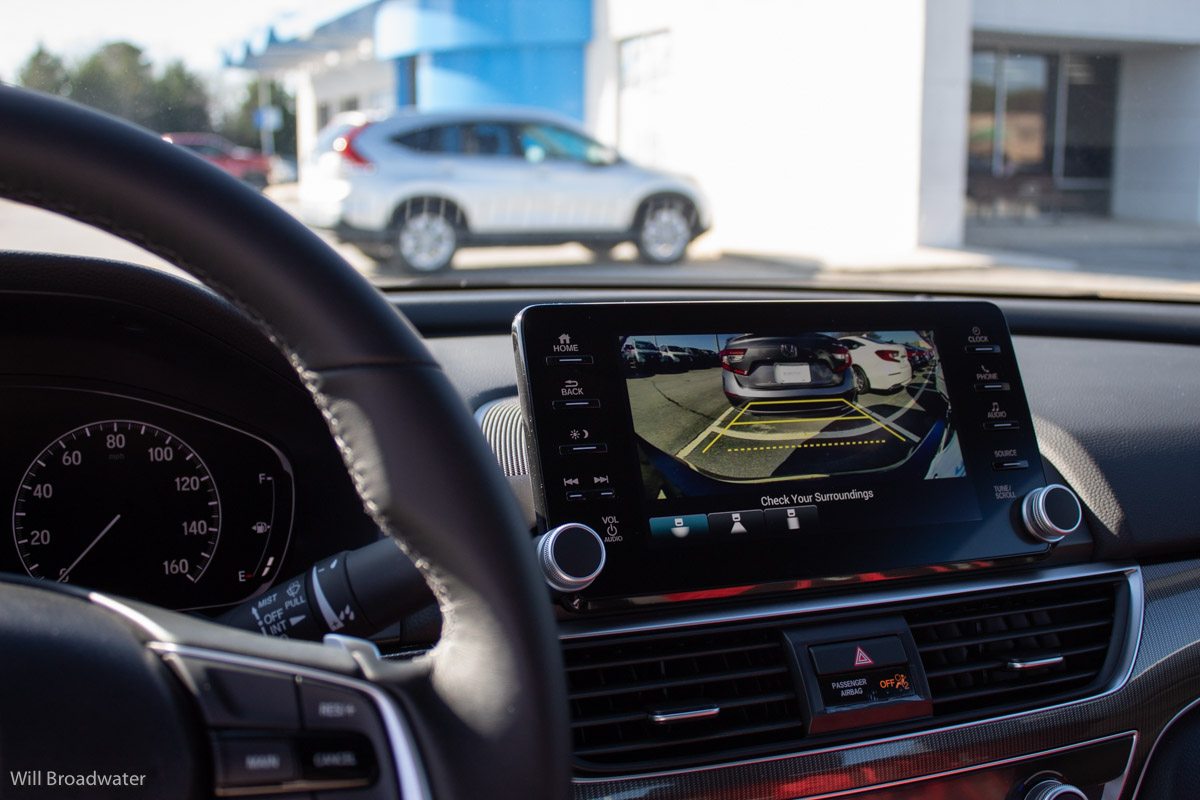 The interior of the white 2015 Honda Accord at Phil Hughes Honda shows the back up camera function on Jan. 20, 2020. This model has a digital interface built into the front console, with bluetooth capabilities, along with AM/FM and Sirius XM Radios. The 2015 Accord also offers rearview and lane change cameras to avoid accidents from drivers’ blindspots. Bluetooth capabilities allow the driver to use their device hands-free. (Photo/Will Broadwater)

Car safety technology has changed significantly over the last decade with the addition of features that assist drivers on their daily commutes. Examples include: lane-keep assist, adaptive cruise control and hands-free phone connectivity. These innovations, which allow for less distractions and more control, can also heavily influence buyers who are deciding which car to purchase.

According toAutoBlog.com, an online car comparison tool, when comparing Honda Civic models from 2015 to 2020, features like adaptive cruise control and lane-keep assist are becoming standard. During a test drive, Shad Kates, a sales consultant at Phil Hughes Honda in Athens, Georgia, explained adaptive cruise control allows you to set the distance between your car and the car in front of you. To do this, the car uses a camera located behind the rearview mirror.  With this footage, the car is able to react by either automatically braking or steering to avoid collisions, as drivers are not always fully attentive to the road while driving.

Distracted driving has become such a large issue that many states, including Georgia, are passing hands-free driving legislation.Georgia’s hands-free lawwent into effect on July 1, 2018. This law prohibits drivers from holding or supporting an electronic device, as well as prohibiting the writing, reading and sending of text-based communications. The penalty for violators is a fine and points on the driver’s license, increasing with each offense. Because of the distracted driving epidemic and hands-free legislation, many cars now come standard with hands-free smartphone connection. Driving statistics show that texting and driving increases the possibility of an accident by 23 times, according toDriving-Tests.org, an online driver educational platform. TheNational Highway Traffic and Safety Administrationreports that in 2016, out of over 34,000 fatal crash incidents, over 3,000 of them were caused by distracted driving.

Why It’s Newsworthy: This story is timely due to the yearly additions of safety technology in cars. With Athens, Georgia being densely populated, these car safety features could help drivers during the congested morning and evening traffic.

To help buyers make decisions on what to look for in a car, Jon Linkov fromConsumerReports.orgcompiled a list of safety features in newer cars. He states that automatic braking and forward collision warning, as well as blind-spot warnings are a must-have when it comes to driver safety. Shad Kates from Phil Hughes Honda explained that the radar in the grill of the 2020 Honda Civic will signal the car to brake automatically if an accident is imminent, making it a high value safety feature. Linkov also recognizes hands-free phone connectivity and physical control knobs as being essential convenience features. There is a concern that a full touch-screen control system can actually lead to more distraction due to their sensitivity, Linkov explains.

Indeed, some believe these tech advances can lead to the driver being more distracted. TheInternational Association of Traffic and Safety Sciencesconducted astudyon the effects of in-car technologies and their connection to distracted driving. They found that hands-free phone conversations can still be distracting, as it can cause the driver to be fixated on the conversation, leading to them focusing only on what is in front of them. This takes the driver’s attention away from peripheral objects, like surrounding cars and road signs.

Car safety technology is being improved with a goal for human error to be minimized, ensuring the driver reaches their destination safely. Car safety has become a key area of focus in car manufacturing, due to the high number of fatalities on the road, as there were 37,133 overall fatalities in 2017according to the NHTSA, with some crashes having multiple fatalities. Manufacturers are coming up with new ways to make driving easier and safer for everyone as they travel to their destinations.

Will Broadwater is a senior majoring in journalism in the Grady College of Journalism and Mass Communication at the University of Georgia.