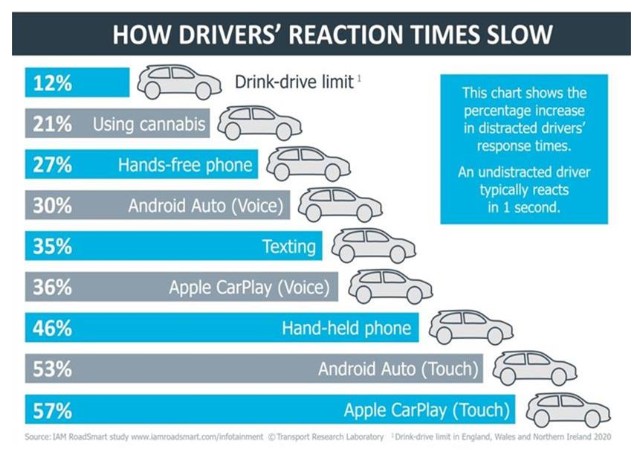 A new simulator research study conducted by IAM RoadSmart has found that interacting with Android Auto and Apple CarPlay can impair driving performance to potentially dangerous levels. The study results show that the latest in-vehicle infotainment systems impaired driver reaction times behind the wheel more than alcohol and cannabis use. According to the researchers, reaction times at motorway speeds increased average stopping distances between four and five car lengths.

The study showed that drivers took their eyes off the road for as long as 16 seconds while driving and using touch controls. The use of those touch controls resulted in driver reaction times that were worse than when people are texting and driving. Researchers behind the study are now calling for action stating that updated, consistent standards are required to minimize driver distraction.

Key takeaways in the study include that participants underestimated how long they were looking away from the road by as much as five seconds. These touch controls for infotainment systems significantly increased reaction times, and infotainment systems are getting more complex in vehicles. Researchers are encouraging employers of individuals who drive for work to review their advice and policies after the research along with asking for standards.