Here's What Happened - So Much Life 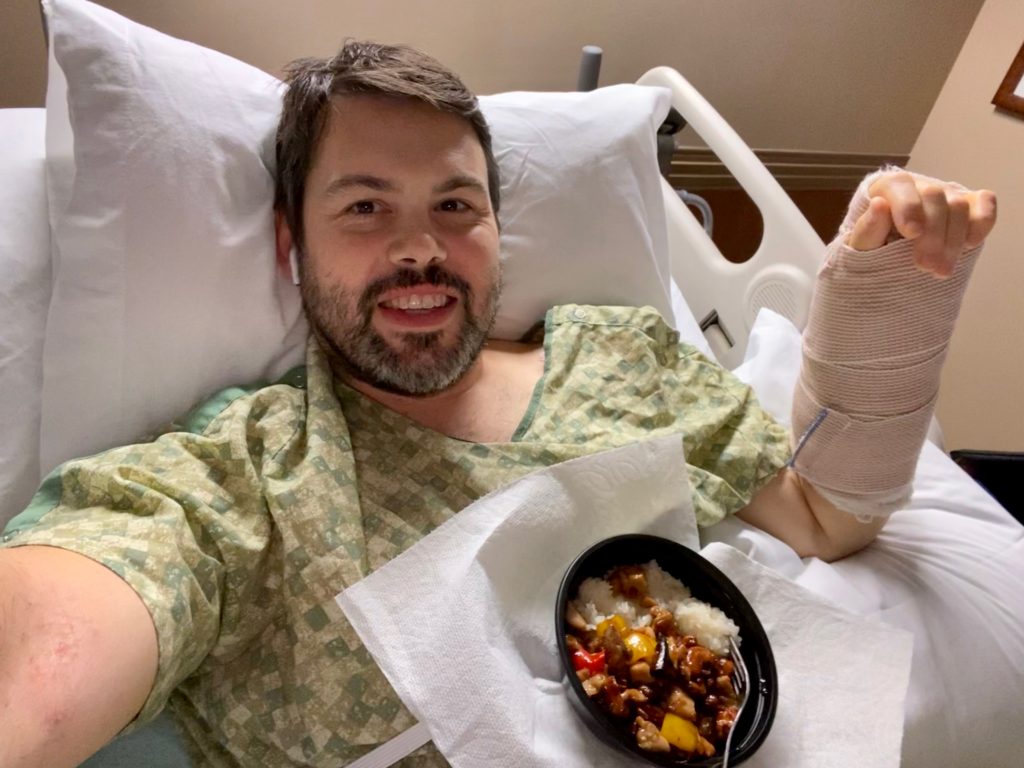 Hi friends! I took a few days away from blogging so that I could gather my thoughts and figure out how to navigate my way through this new normal. In case you missed it, Nate was in a car crash and has been hospitalized for the past 12 days. TWELVE. I haven’t seen him in 12 days due to COVID-19 visitor restrictions at the hospital, and he’s been alone and fighting to get better in the hospital that entire time. He’s alive and stable and most of the injuries are in his lower right leg, so we’re counting our blessings right now.

Nate was driving toward home when he was hit head-on by another driver. We have a little electric Smart Car that we use for quick trips around town (it was super handy when we went out on date night to restaurants downtown, because we could squeeze into tiny parking spots in downtown Austin). Nate was in that car, in a mostly empty road on a Thursday afternoon, when an oncoming car suddenly veered across three lanes of traffic, crossed the center turn lane and drove onto the wrong side of the road and hit Nate head on. Witnesses said the other driver’s head was down, which made us think he was texting and driving. But it was such a quick and direct hit, and we’ve since found out that he has a long, messy record of possession of controlled substances, he’s been in and out of jail, and he was driving uninsured, so now we’re pretty sure that he was under the influence of something.

Nate called me from his Apple Watch right after he was hit and said, “I was in an accident, it’s bad.” I immediately drove to the crash site. Both sides of the street were closed to traffic, and I saw lots of flashing lights from ambulances and fire trucks. There were EMTs running around, glass and debris everywhere, and onlookers staring and filming with their iPhones. I parked my car and got Milo’s infant carrier out of the car and carried him around with me, stepping around glass and looking for Nate amidst the noise and chaos. I saw a few EMTs with a body at the opposite side of the road, walked over there, but it wasn’t Nate. I turned around and saw Nate’s car in the middle of the road, and then realized that he was still in it. All of the windows were smashed out, the front of the car was missing, and all the airbags had been deployed. He didn’t register that he saw me, and his face was white and he had a glazed-over look in his eyes. I started running toward him when a police officer asked me what I was doing. “I’m his wife!! Is he ok??” The senior police officer walked over and said, “ma’am, you need to take your baby back to the car. Your husband will be ok, but right now I need you to be strong for the baby.”

While the police was getting Nate’s information from me, the EMTs pulled Nate out of the car and got him loaded on a stretcher and into the ambulance. A woman approached me and asked if she could do anything. I have no idea who she was, but her face was kind and full of compassion, so I asked her to stay with my baby in the car while I went into the ambulance to check on Nate.

I climbed into the ambulance and sat by Nate’s head and held his good hand (his left wrist was broken) while three EMTs made sure he was stable. His leg was sliced open down to the muscle and laying at a funny angle, and his face showed so much pain. I sat with him for about 5 minutes until they said I had to get out of the ambulance so they could take him to the hospital. I told him, “I’ll meet you there, you’re going to be ok” and then I gave him a kiss goodbye. I had no idea that would be the last time I’d see Nate for weeks! A friend of mine had just delivered her baby, and she was allowed to have one support person. I figured that the rules would be the same for an emergency surgery: one support person.

The “no visitor” policy at the hospital applies to patients in the trauma unit, so I wasn’t able to make it past the front door to be with Nate. Since then, I’ve gotten updates of his surgeries and injuries from the skilled nurses and doctors who are taking care of him. It’s definitely frustrating to receive information in bits and pieces and crackly phone calls, but we’re slowly figuring out how to best communicate. And I’m flexing my communication muscles and learning who to call and what to say to advocate for Nate and make sure that he’s getting everything he needs. The surgeon performed a fasciotomy on his right leg; if that hadn’t been done, Nate would have lost his leg, and I’m so thankful for the skilled ambulance driver and hospital staff and surgeons who are doing all they can to make sure Nate will be able to walk on two legs in the future. Nate has 4 breaks (3 in his leg, 1 in his wrist.) Every 2-3 days he has to go down to surgery in order to have the leg cleaned out and the wound vac changed, and they’re also gradually closing up the leg and fixing his wrist (he has some snazzy new internal hardware now!). His leg has been too swollen to fix the bones just yet, so he has external hardware holding it together while they keep working to get the swelling down so that can do the final operation. He’ll have another surgery to put some internal hardware into his leg and close one side of the fasciotomy opening, and then sometime in the future he’ll have a skin graft to close the other side of the leg.

It’s a really frustrating situation, and Nate’s going to have to fight for a long time just to get back to where he was before (which is walking on two functioning legs). I miss him so, so much. The nurses are incredible, but there are a million things I could do for him to make him more comfortable if I could just get into his hospital room. Tiny things, like organzing his room and requesting things on his behalf and adjusting his blankets and holding his hand. I’m FaceTiming in to all of the visits with OTs and PTs and PAs and surgeons, but FaceTime isn’t the same as communicating in-person, so I feel like I’m only getting about 60% of the information. And it goes the other way, too. Nate is able to FaceTime with Milo and me at home, but I know that he’s missing some really fun weeks of Milo’s life, and I hate that he’s not able to witness Milo learning to sit up and scoot around and try more solid foods. Milo turns 6 month old tomorrow, and Nate will miss it.

I keep telling myself that this could all be so much worse. He had one particular surgery that was harder than the others, and he was so confused when he woke up from it. He called me to FaceTime, but he was so groggy and confused and I wanted to be able to sit next to him so badly! He finally stopped asking me questions (“where am I?” and “am I ok?” and “what happened to me?”) and he fell asleep for a nap, but he didn’t want me to go anywhere so Storm and I sat on the other side of the iPad that afternoon. I sat there watching him and thinking how thankful I am that Nate has his life right now, and that his brain and his spine weren’t severely injured from the impact.

So, here we are! Figuring out a new normal and anticipating Nate’s homecoming. If in-patient rehab is the right choice for him and the surgeons continue to recommend it, we’ll definitely do that. But it would mean an additional 2 weeks before I can see him again. Until then, I’m very, very thankful for my amazing family members who have been helping me with Milo. I couldn’t do it without them! And thanks to all of you sweet blog readers and instagram followers for all the love; your words have buoyed me. I’ll keep you updated on instagram stories, but I just wanted to share a more thorough report over here on the blog. XO.