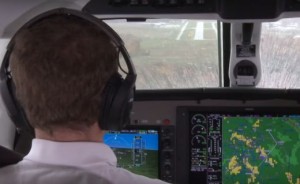 “In the event you find yourself distracted, focus!” There is a certain hilarity in that statement, if one allows it to congeal in between the ears. If you are distracted, how do you know you are distracted, since distraction has got you trapped in its realm?
To illustrate that point, let me tell you a real happenstance that occurred recently. On a clear day when the blue was all blue and not a spot of moisture hung in the air, I decided to get three more instrument approaches under my belt to keep the currency in my proficiency, current. Tagged with a copilot (of many thousand hours in various Air Force jets and large aluminum-bodied airliners) sitting beside me, I donned the “foggles” and off we went, severing the surly bonds.

It was immediately apparent to anyone inside the aircraft, and probably those on the ground looking up, that I was a bit rusty. It took all of 10 minutes to clear those phugoid oscillations that were human-induced and had nothing to do with aircraft aerodynamics or forces of nature. The lesson was quite stark: the moment practice ceases, and the effort becomes an object of striving, it becomes subject to unhealthy distortions. Hence, constant practice makes imagination the object of cognition, where one can foresee the immediate future to a related input, rather than constantly trying to catch up and overshoot.
As time would have it, the yaw damping finally and reluctantly happened and the non-turbulent air we were voluntarily bucking in became non-turbulent. My safety pilot let out a soft sigh, and I heard it loud and clear. No words needed to be said.
But that was not going to be the end of it. I had requested the RNAV approach to Runway 31 into ACY and that had been granted by ATC. Vectoring a long downwind over water was not my favorite thing, especially at 2000 feet, but the controller had control. My safety pilot, probably seeing my struggle, suggested I use the flight director to make it easier on myself. Hmm… he must really think I stink at this instrument thing, I thought.
So, I pressed the FD button on the Garmin box and the command bars dutifully popped up on the primary flight display. I protested that using FD is akin to cheating. But, I thought, since the rust was defining itself in large patches, why not? I surmised that flying the flight director would make it easier on me and might impress him a bit. I figured the sharper sense of discomfort would quickly interweave with the bliss of past expertise and render my inadequacy moot. The sense of this relatedness was short-lived, however.
I had the command bar pegged to the FD and was sailing along towards the final approach fix. I dutifully pulled the manifold pressure to 18 inches, RPM was at 2400, and the airspeed slowed to a comfortable soft drone. The aircraft steadily hurtled along the quiet path and I started feeling on top of my game again as the multi-function display peeled away the blue water behind and dragged in the green below us. Everything seemed whole again. My currency had aligned itself with proficiency.
The final approach fix came and I kept flying the flight director, enamored and comforted by the ease of automation. Another mile went by and I realized that I had failed to put the gear down at the final approach fix. Oops. So I did. I heard a distinct throat clearing from across the aisle. Damn, I thought, this was a terrible exercise in progress. I needed to fix this quick.
Mumbling my displeasure at my own actions, I resolved to be more precise. That expanding idea. The resilient thought. The continuous play of motion in a three-dimensional universe made all the more real the initial collapse of action. The desire to fix what had been broken ceased upon my nerves and now my multiple thousand hours melted away and I felt I was back in training. A certain drift of scent that emanates from failure hit me square in my nostrils and I realized that the glide path indicator had drifted down to the lower end, in accordance with a required missed approach. Damn! Tracing across over the expansive countryside at race-car speeds without the object of arriving the destination in airline fashion was getting worse by the minute.
“It’s a missed approach!” I croaked.

Flight directors are very helpful, but only if you push the right buttons!

“Yes,” is all my copilot said as I flew over the runway at 1500 feet.
What happened? It was all I could think about. Common sense and reason eventually unveiled causality, as they did.
First let me quarry the marble out of this flight and sculpt a phoenix from it.
Distraction was the all-encompassing natural beast that had membered itself to my mental capacities. The suggestion of using the flight director, when pushed by itself, will register stability in the pitch and roll mode only for the current flight path according to Garmin. If I had pushed other buttons, as I should have done when flying the autopilot—namely the approach mode button—then the FD would have taken me through the vertical descent as well. Automation has its, “If This Then That” moments and linearity of thought and action is what the black boxes seek from the pilot in conducting their affairs. None were apparent here, cobbled together in a ball of a single fixated distraction.
Total dependence on automation without careful monitoring-with-expectation is like tranquilizing oneself with certitudes of hope. Imagination as cognition means to look at the forecast future from any action undertaken. A cluttered mind fails to register intentions akin to throwing pebbles in a stormy sea. Distractions clutter the mind and simple but necessary actions go unheeded.
Looking at accidents and incidents related to approach and landing distractions,

All of these were in force at that RNAV approach I detailed above. All of them!
And factors related to such events are:

Again, all these factors were also at play in the above scenario. My total abdication of authority to the use of the FD without the anticipated need for additional inputs caused the missed approach.
How could it have been better?

Sterile cockpit technique and not heeding to the use of FD during the vectoring phase without briefing myself.
Using a checklist for the type of approach.
Monitoring and scanning all data rather than fixation only on the FD.

Number 3 is of importance since our brains function to the laws of recency. We are asked to repeat instructions to ATC to ensure a) we heard the correct instructions and b) we remember to input the instructions correctly in the black boxes. The short term memory lasts in the short term memory banks for 15-18 seconds. Repeating the instructions fortifies them for a bit longer. Otherwise we resort to “Say again.” In this case the suggestion to use the flight director at the last minute was the culprit that brought the entire universe of thoughtful actions to a halt.
We must remember that the human mind is filled with disquieting gaps of the daily life that fill in constant distractions. Achieving the purpose at hand requires clarity of mind and focus. To keep distractions at bay, secure a sterile cockpit and use checklists to bring back the required focus.
To illustrate the dangers of said distractions, here are a few facts and real-life examples:

A study found that children using cell phones are 43% more likely to be hit by a vehicle while crossing the street than children who are not using cell phones.
A 25% increase in pedestrian injuries among 16- to 19-year-olds over the last few years is being attributed to the increase in cell phone use.
Statistics show that texting and driving is three to four times more dangerous than operating under the influence of alcohol or drugs.
Two Northwest ­Airlines pilots flew 150 miles past their destination at Minneapolis while going over schedules using their laptop computers.
A Teterboro tower controller, during a Piper’s departure, was “engaged in a bantering personal phone call about a dead cat while directing traffic.”
A phone conversation was implicated in the Hudson midair collision between a tour helicopter and a Piper Lance that killed nine people.

A few thoughts to keep in mind:

Conversation is a powerful distracter… keep it to a minimum.
“Head-down tasks” during flying are distracting, especially in IFR conditions.
Defer all non-critical activities.
Consider any interruption as a “red flag.”