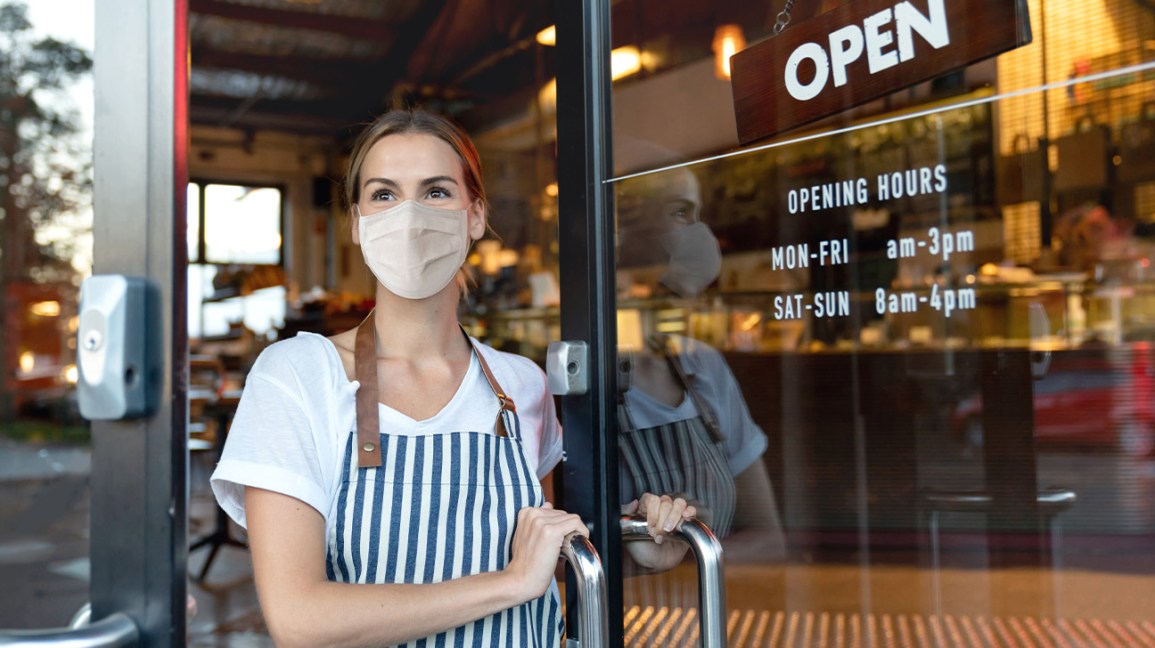 Experts say consistent messaging from community and political leaders as well as continued public education about COVID-19 are key factors in the effort to normalize wearing masks in America. Getty Images As America works to implement public safety measures such as wearing masks and physical distancing to slow the spread of COVID-19, some have begun to argue the measures infringe on their “personal freedom.” Experts say continued education and a need for more consistent messaging is key for changing perspectives, and getting more people to realize the importance of new public safety measures. With more consistent messaging from community and political leaders, experts believe wearing masks in public places can be normalized, like no smoking signs and rules about entering business fully clothed have been. As more states reopen, despite the growing number of reported COVID-19 cases, the idea of “personal freedom” and how it affects public safety during the pandemic has become a hotly debated topic. In the United States, a nation that prides itself on its sense of individualism, everyone from small business owners to public health officials has been wrestling with the idea of how to effectively promote preventive measures to quell the spread of the new coronavirus. We’ve all seen the viral social media videos of restaurant and store patrons flouting physical distancing recommendations and directives to wear face coverings. They often invoke their rights as citizens in a free country, saying this justifies their choice not to comply. When public health is at stake, however, doesn’t being part of a free nation mean also looking out for fellow citizens?

It’s a question that becomes increasingly more confusing for the average American, with mixed messaging from political leaders, health officials, and media pundits alike. At some times, masks have been discouraged; at others, they’ve been promoted. Some states have issued strict physical distancing guidelines, while others haven’t. The list goes on. For instance, after months downplaying — at times mocking — the need to wear masks in public spaces, President Donald Trump donned one when visiting Walter Reed National Military Medical Center this past weekend. Dr. Megan Ranney, MPH, FACEP, associate professor of emergency medicine at Rhode Island Hospital/Alpert Medical School of Brown University, and a director and assistant dean of the Brown Institute for Translational Sciences, says this schism between “freedom” and “health” is a complicated but necessary discussion to have. She looks at this from the perspective of not just public health but a practicing emergency physician and researcher. “On one hand, as an emergency physician who has seen COVID-19 patients who are very sick and many who have died, I find it frustrating to see the virus firsthand, to know we have no good prevention right now other than behavior change, to know that it is on the part of all of us to make that change, and then to see a person say they don’t want to do it. It’s hard,” Ranney, who’s also an associate professor of health services, policy, and practice, told Healthline. She explains that while it’s “tremendously frustrating” to see people not take health recommendations seriously, from the public health side of things, she also can “understand where people are coming from.” “I know how much political beliefs and community milieu influence behaviors in public health. There are decades and decades of research into how to do good science communications to facilitate behavior change, and I know how difficult it is to get people to change behavior,” Ranney added.

Jeffrey Levi, PhD, professor of health policy and management at the Milken Institute School of Public Health at The George Washington University, shares Ranney’s sense of frustration. He notes how in many ways this has been a debate specific to the United States. Other countries around the world have been able to dramatically lower their infection rates and up their adherence to public health guidelines. “There’s only been tension in the United States in terms of public health and policy around personal freedom and this notion of ‘the nanny state,’ and so that usually comes in the context of everything from smoking regulations to guns,” he said. Levi told Healthline that these public health interventions that aim to change individual behavior in this country reflect a national sense of the “self” versus the “community” at large. “In Europe, you have a whole different notion of solidarity and the need to do things for the broader good, so there’s always been some level of tension, and it is now at an extreme in the United States because this has been wildly politicized,” Levi added. Ranney echoes that point, saying that people have received mixed messaging from political leaders who haven’t been clear about the importance of physical distancing. People will respond based on whatever guidance they’re receiving from authority figures. “The reality is our leaders have failed because they have failed to set a good moral example,” said Arthur L. Caplan, PhD, Drs. William F. and Virginia Connolly Mitty Professor of Bioethics at the department of population health at NYU Langone Health. “When Trump won’t wear masks or Pence won’t wear a mask and the White House keeps saying there’s no need to call off rallies or socially distance, then they politicize the issue,” he said. Caplan says what should be a simple preventive health measure becomes “a political statement.” He stresses that this is “irresponsible leadership.” Dr. Charles Rosen, president of the Association for Medical Ethics (AME), the founding director of the UCI Spine Center, and a clinical professor of orthopedic surgery at the University of California, Irvine, told Healthline that blame should go to all parts of the political spectrum in the country. Rosen calls this current debate between freedom and health as a “political football for both sides” — conservative and progressive — in the United States. The discussion over actual scientific facts and health realities have faded to the background in favor of a fight between political leaders. For his part, Caplan adds that he sees gubernatorial leadership, from both Republican and Democrat governors, as a counter to the chaotic, contradictory messaging from the Trump administration. “States where governors embraced mask-wearing and social distancing have become much more successful [at managing COVID-19], and that has nothing to do with Democrat or Republican,” he explained. “In Maryland [Gov. Larry Hogan], with Gov. Baker in Massachusetts, those are examples of leadership. They are Republicans, it shouldn’t be partisan,” Caplan said.

How to change the dialogue When asked what can be done to offer clarity to people engaged in this debate, Ranney says a big part of it is messaging. She says health officials need to develop concise messaging that can be shared across multiple media channels. It can’t all be uniform. It has to accommodate the vast diversity that defines the United States. For instance, you need health messaging aimed at teens, at moms, at essential workers, even “for middle age guys,” she jokes. Beyond that, it has to be accessible for different cultures, in different languages, and directed at different socioeconomic and cultural groups. “You also have to have masks available ideally free or low cost that are available at every workplace. Then you have to set the standards in the same way smoking in close proximity is not acceptable, texting and driving is not acceptable. You have to change the ‘acceptability,’” she said. A in the journal JAMA Network Open seems to confirm this. The researchers wanted to see whether public health campaigns centered on COVID-19 prevention that used digital news media and social media were tied to improvements in personal hygiene. Based in the Netherlands, the study — a targeted social media, news article, and video campaign — saw about a twofold increase in handwashing behaviors. Beyond media campaigns, individual states have shown different gradations of legal orders to enforce distancing and mask-wearing. For instance, in New York state, private businesses have been warned their liquor licenses will be revoked if they violate physical distancing guidelines. Zooming in on the personal level, the pandemic has even found its way into family legal cases, with divorces rising and even fights over which parent adheres to COVID-19 preventive measures finding their way in custody battles. Essentially, there isn’t one aspect of American life that hasn’t been touched by this debate over who should or shouldn’t be asked to adhere to health recommendations. Levi says he does have a sense media coverage of people resisting physical distancing and mask orders have been overblown. While a lot of publicity has been given to those pushing back against the changes COVID-19 are causing in day-to-day life, he stresses it’s “hard to know to what degree” a certain portion of the population is actually resisting these guidelines. “I would say I don’t think we have a good answer to the question of where political leaders have come in and mandated masks, whether there is a low rate of compliance because of this controversy. I think the issue is how can public health leaders bring political leaders on board so the norm is changed,” he added. Levi says that is of course asking a lot of public health leaders. But it’s happened before. Levi got his start in HIV research in the 1980s and cited that public health effort, which was involved to sway politicians to take that crisis seriously. “I never thought I would say this, but Ronald Reagan’s silence, well, we thought it was terrible and damaging. And it was. But it was much less damaging than the total anti-science, anti-public health positions that President Trump has taken,” he said. Caplan suggests that one thing that might sadly hammer home the importance of public health guidelines is the dark reality of the recent uptick in cases. The more COVID-19 becomes a concrete reality, the more people might be willing to protect themselves and others. “I do think, long term, we are going to have to step back and think about structurally what needs to be different so that public health interventions will be more broadly embraced and followed,” Levi said.

Of course, the group facing perhaps the most difficult task of negotiating through these debates on a daily basis are everyday citizens. Without clear national leadership and sometimes confusing media messaging, there’s a sense right now that many have to figure it out on their own. For instance, the owner of a small cafe now has to consider not just keeping their business afloat, but ensuring patrons adhere to these guidelines. “It’s putting pressure on the most vulnerable economic group of people in the country who are trying to put food on the table for their families,” Rosen said. Ranney says this is where local governments come into play. She says when there’s a vacuum of leadership at the top, local government officials can set clear guidelines to make it easier for a business owner, for instance, to set limits at their establishments. “Another key is providing easy educational materials for store owners, providing them with masks, training them about the conversations that might come up, increasing their sense of self-advocacy,” Ranney added. “I use the ‘safe sex analogy’ for kids. We have that conversation with them, it is the same kind of awkward-but-important discussion,” she said. Caplan says this new normal for the average American is “a pain in the neck” they shouldn’t have to deal with, but it’s a reality that has to be faced. He says stores have long had no smoking signs and rules about entering fully clothed. Wearing a mask will be similarly normalized, he predicts. “It’s not an unknown oddity that Americans seem, overall, more comfortable getting rules enforced by the private sector than government. I can’t explain it for the life of me,” he added.