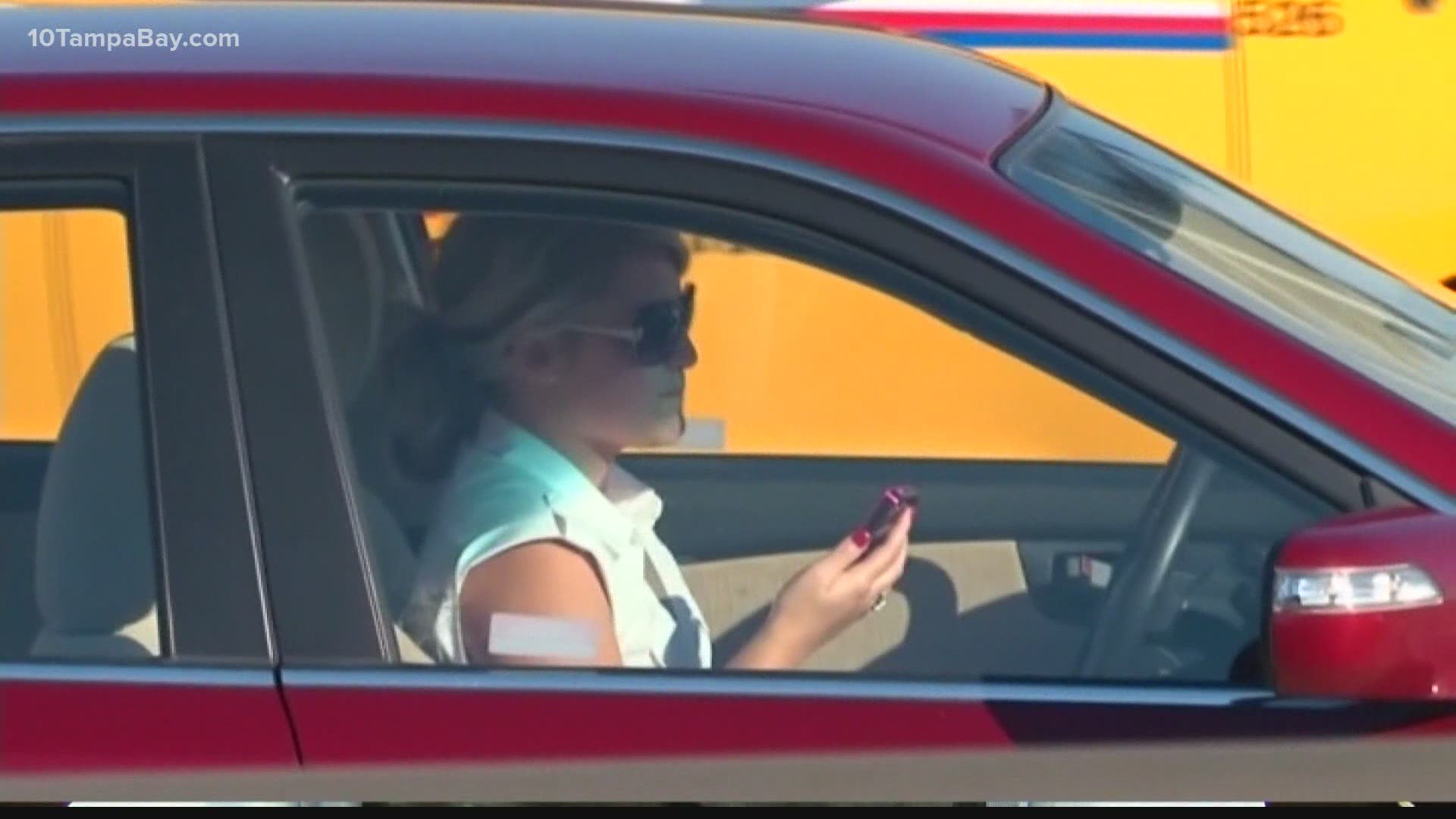 AAA is warning people that distracted driving can be just as dangerous as driving “intoxicated“.

TAMPA, Fla. — October is distracted driving awareness month, and this year AAA is warning people that driving “intextictated" can be just as dangerous and distracting as driving “intoxicated“.

“I am permanently injured. I can’t enjoy a lot of the things that I used to enjoy,” Gonzalez said. “My quality-of-life is, not what it used to be.”

Whether driving under the influence or texting, “the result can ultimately be the same. Somebody could end up in a crash or even die,” AAA Spokesman Mark Jenkins said

Jenkins not only preaches against distracted driving; he knows the danger firsthand. Earlier this year, his own SUV was rear-ended by someone looking down at their GPS.

“It’s something I’m still dealing with to this day. I have pain in my neck, pain in my back, and it’s because of somebody who was driving distracted,” Jenkins said.

The Mauer family, Dawn and Howard, lost their daughter Deanna to distracted driving. Howard has since put his daughter’s image on the back of his vehicle along with a message letting everyone know a person texting killed her.

“Maybe it’ll hit. Maybe they’ll look at my back window while they’re behind me on the streets, in a parking lot, and they can make a reasonable assumption that it’s not worth it,” he said. “It’s just not worth it.”

“My life stopped. And I don’t want anybody to do that to somebody,” Dawn Mauer said. “I want people to know, stop doing this.”

This year, Florida enacted a new law, making texting and driving a primary offense with penalties of $30 for the first violation and a $60 fine and 3 driver’s license points after that.

AAA found that looking away from the road for just two seconds doubles the risk of a crash. In five seconds, it’s like driving across the length of a football field blindfolded.

The top three distractions, they say are cell phone use, technology built into today’s modern vehicles, and passengers. In Florida there were 213 distracted driving crashes in 2018, causing 231 deaths.

AAA’s message against driving “intexticated” is for everyone. However, they say younger drivers are statistically three times more likely than adults to be involved in a deadly crash.

“You hear it and you see it, but you don’t take it seriously until it happens to you. And it shouldn’t be that way,” Gonzalez said. “I want people to be able to understand that it can’t happen to them, and it can happen in a split second.”