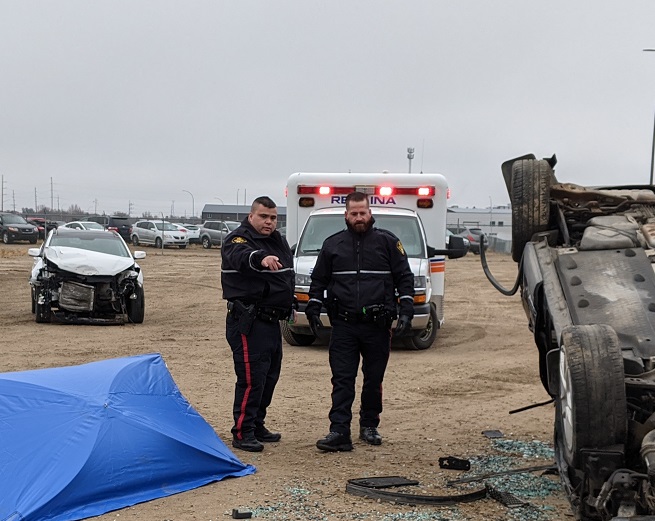 “Keep your eyes on the road ahead – everything else can wait” is the latest campaign message from Saskatchewan Government Insurance to discourage drivers from driving distracted.

The new awareness campaign shows the devastating consequences of distracted driving by sharing a 60-second commercial based on actual experiences of collisions from Saskatchewan first responders. The commercial depicts the scene of a fatal crash and shows the impact it can have on family and friends.

The campaign also includes 15-second videos which consist of different scenarios of people texting and driving.

Andrew Cartmell, president and CEO of SGI, said recent progress has been made in reducing distracted driving. However he admits there are still many drivers who think it’s okay to use their phones behind the wheel.

“There were 660 people who received distracted driving tickets in September 2020 alone,” announced Cartmell during SGI’s launch event of the campaign on Friday in Regina. “Every day, we see people looking at their phones or being distracted by other things when they should be focused on the important task of driving.”

Featured in the minute-long commercial is Cst. Patrick Foster of the Saskatoon Police Service. Foster, who was on hand for the campaign’s launch event in Regina, said he hopes when people watch these videos they realize texting while driving can cost someone’s life and happen to anyone.

He admitted cell phones have become an addiction for some drivers.

“People pick them up and touch the screens without realizing they are doing it,” said Foster.

“We need to put that phone away and take steps to make sure it’s in your pocket, turn it to “do not disturb”, turn it off or throw it in the back seat.”

Sandra LaRose was also in attendance at Friday’s event to share her personal story of how a distracted driving event has changed her life.

She lost her 17-year-old daughter Kailynn Bursic-Panchuk after she died in a distracted driving collision back in 2018. Kailynn’s vehicle was hit by a train and she passed away in hospital a few days later.

LaRose said it’s a personal choice that is totally preventable.

“It upsets me. I’m upset every day and I grieve every day,” “I’ll do anything in my power to help SGI, the Regina Police Service, RCMP and anybody to prevent any other families from having to go through this.”

In 2019, 16 people died and 688 were injured on Saskatchewan roads due to distracted driving.

The province-wide campaign starts up on November 2.