New penalties for texting and driving kick in Jan. 1 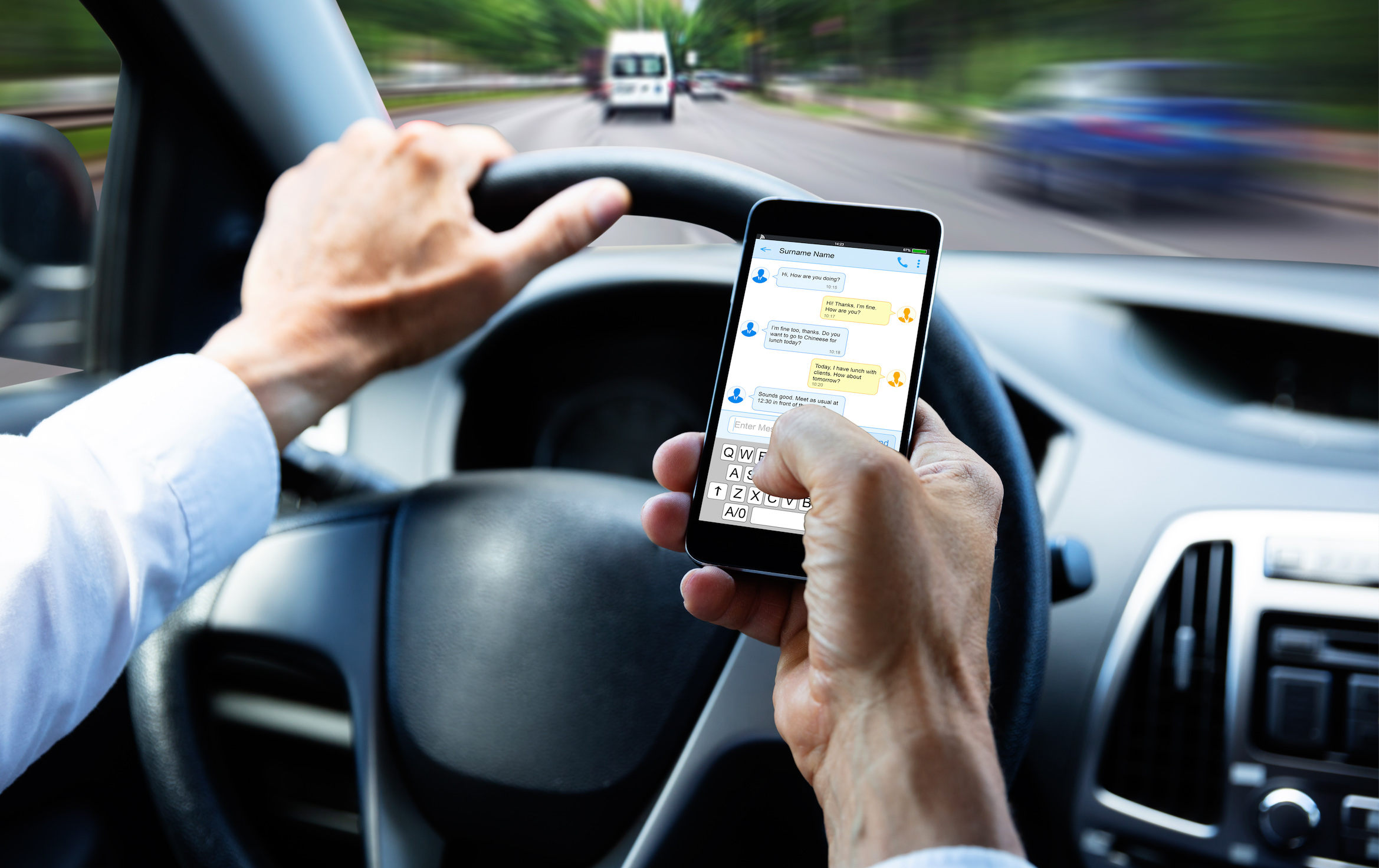 A 2019 law about driving while texting becomes real in a few days. It’s technically been illegal since April 2019 for motorists to use a hand-held cellphone.

But until now the law allowed police to issue only a warning, though some communities had their own bans.

All that changes on Friday, Jan. 1, when the law gets real teeth.

A first-time offense would result in a fine of up to $149, though it could be no less than $75. Subsequent violations could lead to fines up to $250.

Many Republicans favored a different measure that was aimed at “distracted driving.”

Proponents of that version argued that the problem with simply focusing on texting and cell phone use is that it fails to address other things that people do.

“There’s people eating burritos who are swerving because they’re trying to put sauce on their food,” Grantham said. “Anything can cause a distraction.”

But that version contained what some advocates of a hard ban on texting while driving considered a poison pill: Police could stop and cite a motorist only if the vehicle were being driven “in a manner that is an immediate hazard to person or property” or the driver does not “exercise reasonable control” to avoid hitting someone or something.

This law, however, says an officer is free to stop someone who is seen operating a vehicle while holding an electronic device, regardless of how well — or poorly — that person is driving.

Rep. Noel Campbell, R-Prescott, one of the champions of that version, told colleagues the strict enforcement is appropriate — and long overdue.

“We are only one of three states in the entire nation that does not ban text messaging and driving even though we know the frightening statistics,” he said.

Grantham, however, argued the language is overly broad.

He pointed out that, as approved, it does more than simply make it illegal for a motorist to have a cell phone in hand. It would also be a violation if someone “supports (a cell phone) with any part of the person’s body” unless the motorist is also using a hands-free device.

“That could be sitting in your lap,” he complained. “That’s way too restrictive.”

House Majority Leader Warren Petersen, R-Gilbert, said it would be one thing if the legislation was limited to things like texting or checking social media. But he said there’s nothing inherently dangerous with talking on a cell phone, even without a hands-free device.

“There have been people who have driven their whole lives holding their phone up, talking on their phone, that have not had an accident, myself included,” he said. “We’re going to make an awful lot of people lawbreakers with this bill.”

That argument that some people can talk and drive did not impress Rep. Randy Friese, D-Tucson.

He pointed out that people get Amber alerts about missing children, and silver alerts on missing seniors, on their cell phones, information which includes a description of the vehicle being sought.

“That life is just as important,” Cook said, with this law barring people from checking out these messages while driving.

The final House vote on the matter occurred with family members of those killed by texting motorists watching in the gallery. House Minority Leader Charlene Fernandez, D-Yuma, specifically addressed the survivors of Clayton Townsend, an officer with the Salt River Police Department who was killed in January 2019 when he was struck by a texting motorist while conducting a traffic stop.

“We’re going to get it done today,” she told them.

“I understand the pain of what happened, of losing these officers,” said Rep. Anthony Kern, R-Glendale. But he voted against the measure, saying “it goes a little bit too far.”

“I think everyone just saw this as such an avoidable death,” the governor said. “And when somebody comes down (to the Legislature) and speaks with the power and passion of a mom on behalf of her fallen son, how could they not deliver this to the governor’s desk?”

Toni Townsend said she and the family actually celebrated approval of the bill the day before Ducey’s signing ceremony, on Easter Sunday, with the family going to the cemetery and sharing pictures.

“So it’s been a joyous couple of days,” she said, even if it came “out of some horrible tragedy.”

“No good can ever come from that,” Townsend said. “But we can have a positive and we can at least have a legacy for Clayton.”

Among those who was unaware of — or ignored — the hazards was the governor himself.

Ducey, who is now driven almost all the time by his security detail, confessed to his own practices before he took office in 2015.

“I’m sorry to say that I did,” he said, though it never resulted in an accident. Still, the governor said, that’s not the point.

“Now I know it’s not about being good about working your phone and driving, it’s that you shouldn’t be on your phone while driving,” Ducey said. “So my behavior will change as well.”

Here’s what you need to know about the texting law:

The new law makes it illegal to “physically hold” or “support with any part of the body” any cell phone or other portable wireless communication device while operating a motor vehicle.

There was some debate — and no clear answer — on what constitutes “support” of a phone, whether that means in the lap, in the pocket or elsewhere. But from a practical standpoint, if it’s in a lap it is unlikely that a police officer would see it there and pull someone over. The law bans not only chatting on the phone but writing, sending and reading text messages, emails, instant messages or internet data.

Drivers can make calls if they use earpieces, headphones or any type of device worn on a wrist to conduct voice communications. Vehicles with built-in interfaces with cell phones also are exempt as long as they can be operated with minimal interactions, meaning simply to press a button to active or deactivate. People also can “read” texts if these are translated into voice. And they also can send texts if done through voice commands. Phone maps and GPS also can be used if in a hands-free mode.

What about other types of devices?

The same restrictions on holding a cell phone also apply to any “stand-alone electronic device.” That means anything with stored audio or video. So no hanging on to the phone while listening to previously recorded podcasts or watching tapes of Game of Thrones.

Is it OK to watch live TV?

That already is illegal. But the new law clarifies that the statute does not apply to mapping services that update images. Nor does it apply to cars and trucks with built-in video screens that provide information about the vehicle.

The legislation also adds a provision designed to protect people who have dash cams and similar devices that continuously record what’s going on, either in the vehicle or on the road.

Are there other types of operations that are not subject to the law?

Motorists can use a cell phone to “report illegal activity or summon emergency help.”

Also not subject to new restrictions are licensed amateur radio operators and fleet drivers with commercial licenses communicating with a dispatcher.

And for those who are still attached to their citizens band radios, you can keep yakking away, good buddy.

What about texting or talking when the vehicle is not moving?

It depends on where. Motorists who are parked, out of traffic, are exempt and can call and text at will. Ditto if you’re at a stoplight or waiting for a train to clear a railroad crossing.

But a stop sign doesn’t count. Nor does being stopped for a school bus.

What is the penalty?

A first offense carries a minimum fine of $75, up to $149. Subsequent violations result in fines of at least $150 and no more than $250. But the offenses accumulate no points on a motorist’s license.

There is an exception: Licenses can be suspended if someone is violating the new law and causes a serious injury or death.

Do I have to give my cell phone to a police officer when stopped?

No. There is an exception allowing police to seize a device for “when authorized by law,” but there is no definition.

Any city, town or county ordinance that has been in force before this is now repealed, whether it is more or less stringent than the state law.